Published / Updated On: May 27, 2020 Category: Government Pageviews: 88 No Comments | Leave a Comment / Feedback Uploaded By: Kumar
No. of Pages: 9PDF Size: 0.25 MBLanguage: EnglishSource / Credits: mygov.in
16 People Like This
SHARE THIS AND SPREAD THE LOVE 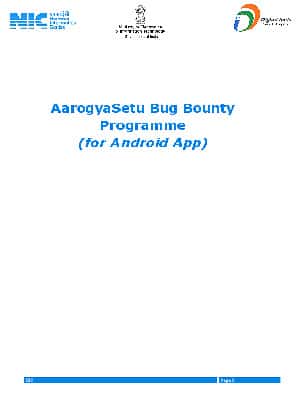 In line with India’s policy on Open Source Software, the source code of Aarogya Setu Android App has now been made open source. The source code for the Android version of the application is available for
review and collaboration at https://github.com/nic-delhi/AarogyaSetu_Android.git.

The iOS version of the application will be released as open source within the next two weeks and the server code will be released subsequently. Almost 98% of Aarogya Setu Users are on Android platform.

While making the code Open Source, Government of India also seeks the developer community to help identify any vulnerabilities or code improvement in order to make Aarogya Setu more robust and secure. Towards this objective, Government has also launched a Bug Bounty Programme with a goal to partner with security researchers and Indian developer community to test the security effectiveness of Aargoya Setu and also to improve or enhance its security and build user’s trust. Details of the Bug Bounty Programme along with the rewards therein are being shared separately. Details of the Bug Bounty Program is available on the innovate portal of MyGov at https://innovate.mygov.in/.

REPORT THISIf the download link of Aarogya Setu App Bug Bounty Programme PDF is not working or you feel any other problem with it, please REPORT IT by selecting the appropriate action such as copyright material / promotion content / link is broken etc. If Aarogya Setu App Bug Bounty Programme is a copyright material we will not be providing its PDF or any source for downloading at any cost.