Published / Updated On: September 1, 2020 Category: Education & Jobs Pageviews: 2,870 No Comments | Leave a Comment / Feedback Uploaded By: pk
No. of Pages: 15PDF Size: 0.49 MBLanguage: EnglishSource / Credits: Drive Files
5 People Like This
SHARE THIS AND SPREAD THE LOVE 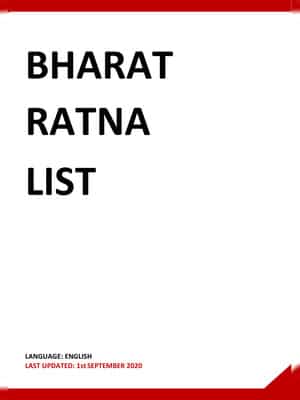 The Bharat Ratna is the highest civilian award of the Republic of India. Instituted on 2 January 1954, the award is conferred in recognition of exceptional service/performance of the highest order, without distinction of race, occupation, position, or sex. The award was originally limited to achievements in the arts, literature, science, and public services, but the government expanded the criteria to include “any field of human endeavor” in December 2011.

The recommendations for the Bharat Ratna are made by the Prime Minister to the President, with a maximum of three nominees being awarded per year. The recipients receive a Sanad (certificate) signed by the President and a peepal leaf-shaped medallion. There is no monetary grant associated with the award. Bharat Ratna recipients rank seventh in the Indian order of precedence.

The first recipients of the Bharat Ratna were: the last Governor-General of the Dominion of India – C. Rajagopalachari, second President and the First Vice President of India – Sarvepalli Radhakrishnan, and Nobel Prize Laureate, Physicist C. V. Raman; who were honored in 1954. Since then, the award has been bestowed upon 48 individuals, including 16 who were awarded posthumously. The original statutes did not provide for posthumous awards but were amended in January 1955 to permit them.

Former Prime Minister Lal Bahadur Shastri became the first individual to be honored posthumously. In 2014, cricketer Sachin Tendulkar, then aged 40, became the youngest recipient; while social reformer Dhondo Keshav Karve was awarded on his 100th birthday. The first singer to be awarded Bharat Ratna was M. S. Subbulakshmi. Though usually conferred on India-born citizens, the Bharat Ratna has been awarded to one naturalized citizen – Mother Teresa, and to two non-Indians: Abdul Ghaffar Khan (born in British India and later citizen of Pakistan) and Nelson Mandela, born in and citizen of South Africa. On 25 January 2019, the government announced the award to social activist Nanaji Deshmukh (posthumously), singer-music director Bhupen Hazarika (posthumously), and to the former President of India, Pranab Mukherjee.